“Still too early, bud, still too early, go back and snuggle with Daddy,” I half-whisper to him, shooing him back into our bed where he loves to sleep best. He had just stumbled into my office again during my early-morning writing time, hand shielding his sleepy eyes from the bright light.

He’s never been an early riser, but he has always, since the tiniest infant, wanted to be close. He co-slept more than his sister or brother ever did, actually sleeping better between us than in his own bed. When he’s having trouble transitioning or angry about my instruction, stopping for a moment to embrace him melts his defenses at least a little. Until recently, he wanted to constantly touch, touch, touch. 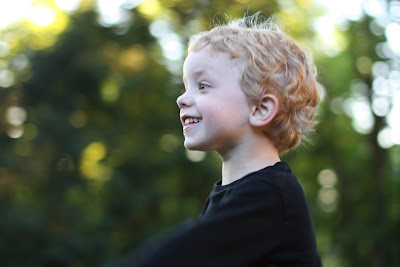 He’s never woken as early as his sister always does, but lately, it’s been around 6 a.m. The funny thing is that he really could sleep for another two hours — and he would, if I were there next to him. He can’t get used to my morning writing routine, so he climbs into my lap once I let him, sweetly whining that “I just want to play with you” or “I just want to be with you.” How do you deny that kind of request?

But I know this time I spend early, inviting the muse, before the distraction of the day, is as vital to me as sleep is to him, so I send him back out, for now, promising to snuggle later, to play soon, to be with him fully after I’ve written what I need to write.

But I know it won’t always be so, and his needs will change with age. He won’t always climb into my lap and say so plainly that he needs a little dose of me. He won’t wake up early just to be close. He won’t prefer my company over all others. (Well, most others. Grandma’s a pretty strong draw.)

So I’ll unwrap the gift of interruptions and the quirks and needs and requests that come with them. These are fleeting times. I don’t want to miss the interruptions.

I’m linking up at Chatting at the Sky today for Tuesdays Unwrapped. Join me there and unwrap more of today’s little gifts.

5 comments on “Unwrapping the gift of interruption (early morning)”