>I’ve never been crafty. I’ve dabbled here and there, and there was that stint where I thought I was into stamping cards, but then I realized I hated it and it made me feel uncreative and bad about myself. Then I also realized that I don’t love the look of most crafty projects; many are too cutesy for my modern sensibilities. (ahem.)

Then for the last few months I’ve been looking for some activity or book to go through with my kids, since we’re not going to a traditional church anymore and I want to show them what a vibrant, active, living faith looks like. (And I think that learning and thinking about Jesus and what he did and said are part of that, along with other daily life stuff.)

So when I saw Truth in the Tinsel was coming out for Advent, I thought it looked pretty good — hands-on activities and short lessons for the littles. Perfect application of the Christmas story for my older kids’ ages. 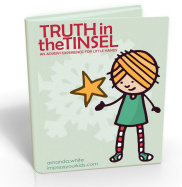 There was one catch: It features one craft per day, an ornament that illustrates an aspect of the Christmas story, for the entire month of December. It’s a great idea because almost without exception, kids love crafts and they’ll remember the story better because they’re making something with their hands about it. And it’s a terrible idea because almost without exception, I do not love crafts.

But I sacrificed for the children and dug out some supplies from the basement bins, found household stuff we could use, and purchased a few things to round out the list.

We’re on Day 5. The kids absolutely love it and eat it up every day. They ask when we’re going to do it, and then beg to do it RIGHT NOW. It’s actually fun for me, too, to see how they’re understanding the stories (for the most part) and having fun making stuff. But it’s also shone a light on some of my not-so-great traits. (Parenting: If you think you’re so great, having kids will prove otherwise. To yourself and everyone around you.)

First, I’m impatient. I knew this, but for some reason trying to manage a craft while reading a three-sentence reflection on the bible verse we just read can send me over the edge. You wanted the googly eye that Audrey picked? Here, let’s use this one. Yes it is good enough. JUST USE IT. Please stop smearing your glue stick EVERYwhere and just do the project. Do we really have to paint the newspaper and the counter, guys? STOP POURING THE GLUE ON THE COUNTER.  *sigh* 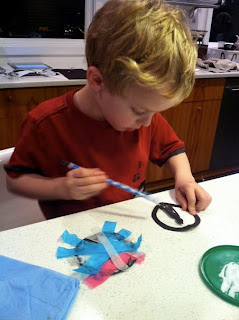 And then there’s my need to make everything perfect — even crafts created by my children. I’m smoothing out Owen’s paint, I’m straightening the hair on Audrey’s Zechariah face. I’m repositioning their tissue paper so it looks better. And at the time, I can even see what I’m doing and still, it’s hard to stop myself.

What is this drive for perfection that is more deeply important to me than respecting my kids’ creativity and ideas? Why do I insist on order and quiet from two rather small children? What is the need that’s driving me to make this project all about me?

I want it to be meaningful for them. I want it so badly that I push and prod and shush and even raise my voice. I WANT TO CREATE MEMORIES, dammit.

But I see what’s happening, what I’m doing. If I want to instill a love of Jesus’ story in them, this isn’t the way to do it. Although God will work through me anyway (such grace!), I don’t want to also have the side effects of sending them the message that their art isn’t good enough for me. I don’t want to instill in them the idea that their wiggly, distracted nature needs to be tamed for God.

I already see in Owen the tendency to give up and ask me to do it if he feels he’s not doing it perfectly. (He was the youngest child for nearly five years, so he’s had a lot of practice having stuff done for him.) It’s easy to rescue, especially when my fingers are itching to straighten this or help with that, but I also want him to know it’s good to fail. That he needs to do it imperfectly first. That it’s OK to accept your abilities and your art for what they are now, knowing they will grow and change — but also believing they have beauty and value right now, too.

And will you look at that? God’s teaching me the lesson I’m trying to teach my son. If parenting exposes all my faults, one of the saving graces is that I get to see how God is parenting me into maturity just as I’m parenting my kids. Sometimes their lessons are mine. Actually, that’s most of the time.

So starting today, I promise to be hands-off and “go with the flow,” as Owen’s kindergarten teacher says. I promise to let them be who they are and trust that God will teach through an imperfect vessel like me. After all, it doesn’t have to be perfect to be good.